Wowmaking has turned an abandoned furniture building in Minsk into a real loft house. The new headquarters of the developer of mobile applications occupy an entire building in the cultural and business district K21. The project was implemented jointly with Belrekonstruktsiya - the interior has retained historic columns, rough brick walls, and an external staircase, just like in old New York houses. A perfect example of what a creative office looks like - in the Realt.by report. 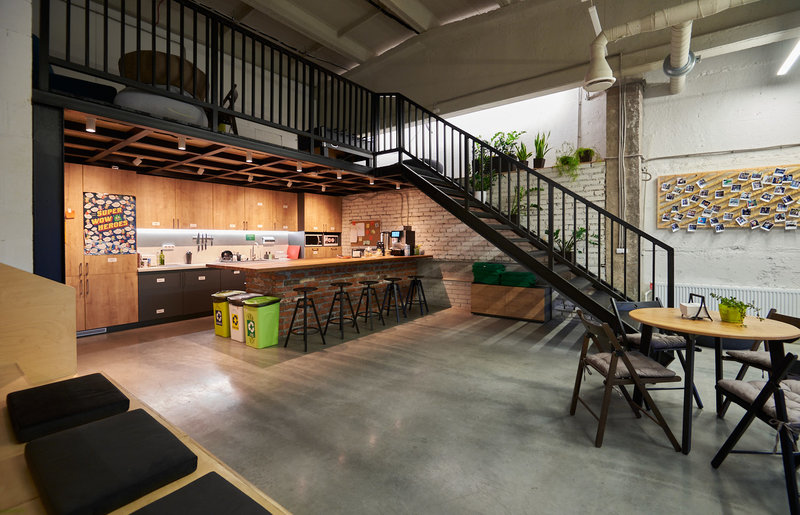 From a factory to a warm office with artefacts

The unusual office building is located in the southern part of the K21 quarter near the Molodezhnaya metro station. Half a century ago, furniture makers were common here, but by the middle of the 2000s, furniture production had moved, and the buildings were abandoned, leaving behind blackened walls, cracked windows, and piles of rubbish. In the spring of 2019, the site was transferred to Belrekonstruktsiya at the market price and rather than levelling the building to the ground, they decided to reconstruct the property. Wowmaking was one of the first companies to notice the project, supporting the developer in his desire to preserve post-war Minsk.

The financial director of the Wowmaking company Ivan Tikota said that the IT developer went along the path of the “dream office” with the developer: the developer restored the building and the tenant created the interior and filled it with people. Alena Zankevich, the architect of the K21 quarter, helped transform the building inside and out.

Before the restoration, the building was a damp-smelling hangar with protruding fittings and faded walls. The builders cleared out the dust and debris, divided it into two floors with floor slabs and redrew the interior with internal partitions. The facade was refined with stylish sandwich panels, and the windows were changed. The building was expanded on one side, and the columns and walls were visually “aged” to fit into the surroundings.

‘It is a big plus that we didn’t go into ready-made areas. This made it possible to bring to life many technical solutions as we saw them. And to achieve them it was not necessary to tear down the walls’ Ivan notes. ‘The details are important: take the same red brick; once upon a time it was fired in a furnace, in some places incorrect, overheated, with a chipped hole. But there is no other like that. You can, of course, buy a new one, but it will be very different since it has not yet gone through the main ageing of time.’

‘The developer had to pull all communications into the building, as before, there was not even electricity here. I also had to do some work on the ventilation system so that air conditioning units carry fresh air to the workplace rather than blowing air out into the corridors.’

Imperfect walls and partitions made of glass blocks

Now the loft house is 1200 square metres. You can get into it in different ways: from the end, the facade, and along the external retro-staircase leading to the second floor. It can easily accommodate a dozen guys – no wonder that it is used for working meetups.

The building also has a “secret” entrance – through the courtyard. Currently it is not in shape – construction equipment is stored here, but closer to summer, there will be picnic areas.

Inside the building, the industrial style is retained: walls with exposed bricks, exposed beams overhead, and slightly sloppy steps, like in an old museum.

‘Where it was possible to leave a brick – we left it so as not to complicate the space with solutions “pluck out the eye” and to emphasise that this is still a loft. Many things were painted white, including the walls made of gas silicate and metal frames, as this expands the space and allows you to connect all rooms, different materials, and textures into a single finished interior.’

Large open-spaces and ceilings 4 metres high give the feeling of scale. Thanks to panoramic glazing, there is an abundance of light in the office; in addition, there is backlighting – practical and decorative.

‘The first impression when you sit in the office is that it is not finished yet. But then you realise that this is how it should be. This is the philosophy: you can always improve something and at the same time be in the here and now,’ – Ivan shares. ‘We deliberately made some things imperfect. There was even an idea to pour paint on the wall to set the relief. When you look at a perfect glossy wall, it doesn’t evoke emotion. When everything is “licked”, the eye has nothing to catch on.’

Another interesting detail is that in the back of the office, the walls are made of glass blocks. Many remember them from childhood – from Soviet swimming pools and schools. So in the office, they are not only for the sake of industrial aesthetics – their hollow structure perfectly transmits light inside but does not give anything in return for prying eyes from the outside. In such a meeting room, you do not feel like you are in a bunker.

In total, the office employs about 110 people. They are divided into several teams, each with its own space for work, snacks, and relaxation. Thus, workplaces alternate with restrooms, lounge areas, and kitchens. The buffets give off nostalgia for Soviet canteens, but with modern technology – coffee machines and microwaves. Employees are fed not only with cookies: they bring cheesecakes and vegetarian burgers.

When the weather permits, many come to the office by bike. Bicycle parking and showers are provided for the employees. A healthy environment has developed around the office: four more buildings of the K21 quarter have opened with offices, shops, and cafes, as well as a food court, a concert venue and a clock tower. Half of the area has already been developed, and everything is decorated in the same style, Wowmaking states.:

‘Such a place teaches us to appreciate what is around us. You can always plaster walls, lay tiles, or create perfectly flat ceilings. But no one can repeat what time has done. This “master” cannot be surpassed, and we must cherish what he gave us. After all, one day, our office will become a part of this endless history.’

Anton, not so long ago, we wrote about Wowmaking and even managed to record a podcast

The Rapid Growth of Non-gaming Apps with Wow-booster

What prompted the Belarusian developer to create Wow-booster, and what products will interest them first, answer

Ten to 12-year-old pupils of the orphanage learn to program in Scratch, and the older group

Product development is a constant search for answers to the questions what can be improved, what

What Programming Languages Are Used to Develop Mobile Applications?

What Mobile App Analytics Tools Do We Recommend?

Firebase This tool is designed for Google Analytics for Mobile Applications. This is not surprising since

What Is the “Jobs to Be Done” Method?

JTBD – what is it? Jobs to Be Done is an increasingly popular approach to product

12 Tips to Get a Job With an IT Company

Create a well-structured resume When looking for candidates for a job, a recruiter has to look